Vintage-loving Holly Anna Paladin finds online dating uncouth and unbecoming. Â But, in an attempt to overcome her romantic slump, her BFF convinces Holly to give it a shot.Â When Holly is stood up on her first date, sheâ€™s halfway relieved . . . until she discovers the reason isnâ€™t because her cyber matchup has cold feet. Instead she stumbles upon him in a classic Mustang, deader than good old-fashioned manners.

Holly’s had enough with investigating crime and leaves her ex-boyfriend, Detective Chase Dexter, to solve this mystery. But Holly is somehow connected to this murder, and someone is determined to keep her in the thick of things. She hopes itâ€™s not Drew Williams, the handsome funeral director whoâ€™s trying to sweep her off her feet.

Before more people are hurt, Holly is determined to unmask the pretender in her life. But can she keep her feelings for Chase locked away? Or will Holly end up losing her heart to him all over again? Â She must solve the case before someone pulls the plug on her profile . . . and deletes her permanently. 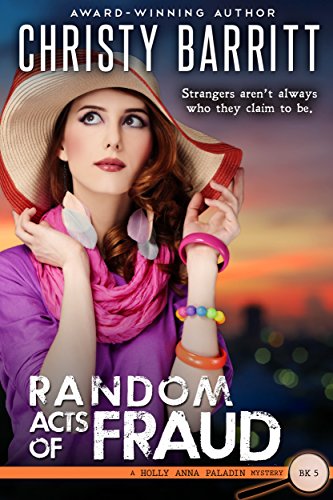 We met Holly Paladin through Gabby St. Clair and she was easy to fall in love with, especially when she thought she only had a year to live. This character is curious, intelligent, and just fun to watch. Her sidekick, Jamie, adds so spunk as well.

This story picks up shortly after book 4 ends. Holly finds herself going on a blind date that in true “Holly” fashion goes south quickly. One of the things I like about Christy Barritt’s writing is she gets the action going early in the book and keeps it going throughout the story. Â This book is no exception!

I love Chase and not to give too much away I’ll keep it at I love Chase, despite his issues I love him!

You could probably read this as a stand alone, but I highly recommend reading this series from the opening book to the current. You will truly appreciate the characters and how they have developed and matured through the series.

In full disclosure, I paid for this book because I like the author. I would (and have) recommended this author and this series to a friends!