I’m not really a private detective. I just play one on TV.

Joey Darling, better known to the world as Raven Remington, detective extraordinaire, is trying to separate herself from her invincible alter ego. She played the spunky character for five years on the hit TV show Relentless, which catapulted her to fame and into the role of Hollywoodâ€™s sweetheart.

When her marriage falls apart, her finances dwindle to nothing, and her father disappears, Joey finds herself on the Outer Banks of North Carolina, trying to piece her life back together away from the limelight. A woman finds Ravenâ€”er, Joeyâ€”and insists on hiring her fictional counterpart to find a missing boyfriend. When someone begins staging crime scenes to match an episode of Relentless, Joey has no choice but to get involved.

Joeyâ€™s bumbling sleuthing abilitiesÂ have her butting heads with Detective Jackson Sullivan and kindling sparks with thrill-seeking neighbor Zane Oakley. Can Joey channel her inner Raven and unearth whodunit before she ends up totally done in? And where is her father anyway? Can she handle fame, or is disappearing into obscurity the wiser option? 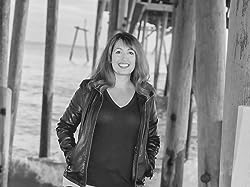 Christy writes both mystery and romantic suspense novels that are clean with underlying messages of faith. Her books have won the Daphne du Maurier Award for Excellence in Suspense and Mystery, have been twice nominated for the Romantic Times Reviewers Choice Award, and have finaled for both a Carol Award and Foreword Magazine’s Book of the Year.

She’s married to her prince charming, a man who thinks she’s hilarious–but only when she’s not trying to be. Christy’s a self-proclaimed klutz, an avid music lover who’s known for spontaneously bursting into song, and a road trip aficionado.

Christy currently splits her time between the Virginia suburbs and Hatteras Island, North Carolina. She has more than fifty books published with over one million copies sold.

I fell in love with Christy’s character Gabby almost 10 years ago when I read Suspicious Minds.Â Ever since I’ve been following Gabby’s antics and loving every minute of it. Then came Holly Anna which was also a really good character, but I didn’t fall in love with her the way I did with Gabby. This year Christy introduces her fans to a new character, Joey Darling. Fallen Hollywood star in search of her missing father.

In these first two books Barritt has given us great action, mystery, and an exciting love triangle. Joey is a blast to watch as she stumbles into being a real life detective, much like the one she played on TV. She also has two men that seem to be subtly or not so subtly trying to win her affection.Â Zane is the carefree, live in the moment type of a guy and Jackson is the serious watch where Â you step type of a guy. Both have their strengths and weaknesses, but at the stage of the game Joey only wants one man, her dad.

In these first two book the stories have been interesting and exciting, giving the reader little tidbits of information. Each book makes me want to hurry and read the next one.

I appreciate that these books are coming out “fast.” Â Book one released January 1st, with book two releasing the end of January. Book 3 is slated to release March 28th and yes, I’ve already pre-ordered it!

The other nice thing about these books is the cost! If you are a Kindle Unlimited member they’re free, if not, they are only $2.99 each. A great deal on a great series!