Though sheâ€™s loath to admit it, Audra Drysdale needs a man to save her ranch.

Her father has passed away and her hands are abandoning her like rats from a sinking ship. Worse, neighboring cattle baron Jess Fairbanks is making a play for the Diamond D and Audra, whichever he can get his hands on first.

Audra grudgingly accepts that the mere presence of a husband will keep her men working, and Fairbanks under control. It seems a perfectly reasonable idea, then, to ask her uncle, who is the town attorney and a matchmaker of sorts, to find her a groomâ€”a â€œproxyâ€ who will take her orders and dish them out to the men.

Dillon Pine is in jail for a conspiracy charge, but because of certain mitigating factors heâ€™s deemed a good risk for an unusual form of probation: serving as Audraâ€™s husband. After a year, he can abandon her and she wonâ€™t tell. By then, she will have proven to the cowboys sheâ€™s a competent rancher, and the cattle man next door will be looking elsewhere for a wife. But when word gets out that Dillon came to Audra via Evergreenâ€™s matchmaker, heâ€™s dubbed a â€œmale order bride.â€ The resulting jokes at his expense are constant and brutal. Just how much abuse can Dillonâ€™s pride stand?

When Audra discovers her fatherâ€™s death was no accident, she realizes her new husband is in danger, too. And she cares . . . quite a lot, it turns out.

To save Dillon, she may have to let go of the one thing sheâ€™s fought her whole life to keep.

A former journalist, Heather is an avid researcher and skillfully weaves truth in among fictional story lines. She loves exploring the American West, especially ghost towns and museums. She has walked parts of the Oregon Trail, ridden horses through the Rockies, climbed to the top of Independence Rock, and even held an outlaw’s note in her hand. You can learn more about her and her work at https://ladiesindefiance.com/ or https://www.facebook.com/heatherfreyblanton. Sign up for Heatherâ€™s email newsletter to receive the latest book release updates, as well as info about contests and giveaways (https://ladiesindefiance.com/).

Heather is the independent bestselling author of several Christian Westerns, including the Romance in the Rockies series, which has sold over 40,000 copies. Intrigued by the concept of three good sisters stranded in a lawless Colorado mining town, a few notable Hollywood producers have requested the script for her first book in that series, A Lady in Defiance. Heatherâ€™s writing is 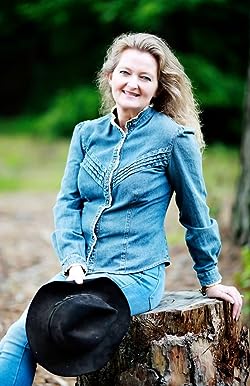 gritty and realistic. In fact, her books have been compared to AMCâ€™s Hell on Wheels series, as well as the legendary Francine Rivers book, Redeeming Love.

She writes Westerns because she grew up on a steady diet of Bonanza, Gunsmoke, and John Wayne movies. Her most fond childhood memory is of sitting next to her father, munching on popcorn, and watching Lucas McCain unload that Winchester!

She can be reached several different ways:

Christian Westerns is the genre that lets her write about strong pioneer women and men who struggle to find God and then live out their faith in real ways. Romance is always a strong element in her stories because it is such a beautiful gift from God, and a perfect reflection of how he loves His children: sacrificially and lavishly. Heather’s stories aren’t preachy or cheesy, but she hopes they are heart-warming, realistic, illuminating, and glorifying to God. Like good old fashioned Westerns, there is always justice, a moral message, American values, lots of high adventure, unexpected plot twists, and more than a touch of suspense.

“I believe Christian fiction should be messy and gritty, because the human condition is … and God loves us anyway.” — Heather Blanton (Source: Amazon Author Page)

AudraÂ is a spitfire of a woman. She has an independent streak a mile wide, but she realizes that in her time women aren’t expected or respected when it comes to runningÂ a ranch. She begrudgingly admits she needs help, specifically a man’s help. It’s fun to watch the fireworks between her and her new husband, Dillon. Dillon is use to being in charge and his new marriage is a struggle.

I don’t want to give too much away, but this was an excellent story. I didn’t find it extremely suspenseful but I thought the author did a great job of dealing with the antagonist. Actually enjoyed that scene immensely!

My only complaint is the book was TOO short! Even though it was a novella the author did a great job developing the characters, Audra and Dillon.

If you have enjoyed Blanton’s “Defiance” series this one is almost as good. (IÂ loved the Defiance series!) This one doesn’t have the same edge as the Defiance story. If you haven’t read this author this would be a great introduction to her style and story telling abilities.

Disclaimer: I received this book free from the publisher in exchange for an unbiased and honest review. The opinions I have expressed are my own. I am disclosing this in accordance with the Federal Trade Commissionâ€™s 16 CFR, Part 255.